Getting to Know Dysport

Getting to Know Dysport

While Botox is currently the most popular non-surgical procedure in the United States, a new product has emerged as a direct competitor- Dysport. Dysport has been used for several years in Europe ever since it was invented in the 1990s to treat neuromuscular disorders.  Recently approved by the FDA, Dysport has commenced to take its place in the US market. Like Botox, Dysport uses botulinium toxin as the main ingredient in the solution. Both products virtually achieve the same results in patients by minimizing the appearance of expression lines in the face such as frown lines, crow’s feet, and horizontal forehead lines.  Few known differences exist between the two.  Dysport is reported to be 1/3 the price of Botox, hence 1/3 the strength, but it takes three more units of Dysport to achieve similar results to taking one unit of Botox. The solution in Dysport also disperses farther than Botox once injected: one to three centimeters compared to Botox’s one centimeter.  An experienced dermatologist is vital for the injection procedure since Dysport’s farther diffusion may spread to unwanted face muscles and cause adverse effects.  So what prompts patients to choose one product over the other? Dr. Christopher O’Connell, Board Certified Dermatologist, specialized in medical and cosmetic dermatology simply expresses, “Dysport is a good option for many patients who would like an alternative to Botox.”  By and large, Dysport has begun to flood the cosmetic market worldwide and patients can now achieve the same results as Botox for a reduced price.  While the quality of both tends to be comparable, Botox is still seemingly more favorable for its widespread distinction.  The good news is that patients now have an additional option when selecting their anti-wrinkle treatment. 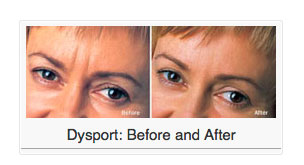 Photograph of Dysport effect before and after [Online Image] (n.d.). Retrieved December 7, 2009, from disport.co.nz.  http://www.dysport.co.nz/about.php
PrLog. (2009, July 14).  Botox vs. Dysport- What’s the Difference? Retrieved from http://www.prlog.org/10282274-botox-versus-dysport-whats-the-difference.html